In my overview video I’ve explained that there are 5 categories of EEA nationals who can be recognised as Qualified Persons. 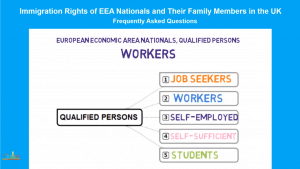 A worker is an EEA national who is exercising their free movement rights in the UK by working in paid employment on a full-time or part-time basis.

There is no minimum amount of hours which an EEA national must be employed. However this employment must be genuine and effective.

The Home Office says it is OK NOT to have a formal contract. However for the employment to be recognised as ‘effective’ there should be an employer. Also there should be an agreement between employer and employee. This agreement should confirm that the worker will perform certain tasks (this may be an oral agreement). There should also be a confirmation the employer will pay. Alternatively, the employer may offer services (such as free accommodation) or goods for the tasks performed.

Let me give you an example here. Mike is a student and works behind the student union bar for 2 hours a week. In this case Mike is actually a student and NOT a worker. This is because his work is marginal and supplementary to his actual role as a student.

In order to establish, if your employment is genuine and effective, the Home Office will also have a look at your Level of Earnings. Also they will consider whether or not you are paying Tax and National Insurance.  There are some circumstances when an EEA national who is no longer working does not stop being treated as a worker. This is known as ‘retaining worker status’, which I’ll explain in my next video.

Do You Need a Visa to Enter the UK?

Calculating Periods of Residence When Making Your Permanent Residence Application