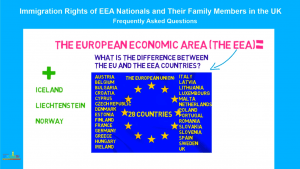 The best way to address this question is to first of all explain what the EU means: The European Union (EU) is an economic and political union of 28 countries. It operates an internal (or single) market which allows free movement of goods, capital, services and people between member states. Here is the list of the countries, which form the EU.

The European Economic Area (the EEA) includes all EU countries and also Iceland, Liechtenstein and Norway. It allows them to be part of the EU’s single market.

Switzerland is neither an EU nor EEA member but is part of the single market – this means Swiss nationals have the same rights to live and work in the UK as other EEA nationals. The EEA agreement is quite limited compared to the EU membership. Among other things, the EEA agreement does not include:

1. The EU Customs Union and trade agreements with third countries.
2. The Common Agricultural Policy.
3. The Common Fisheries Policy.
4. Also EU attempts to coordinate taxation.
5. EU countries share the same monetary policy and the same currency – EURO. AND
6. The Common Foreign and Security Policy. The EU speaks with one voice in international forums, such as the UN.
These are major difference between EEA and the EU.

In the UK immigration law contents the EEA and the EU nationals have equal right but you will always see that the term EEA is used and not the EU. This is simply because the term EEA is wider and includes more categories of people.

Rights of Children of EU Citizens to Enter the UK