According to the Immigration Rules, Tier 2 (General) Migrant route is the route, which enables the UK employers to recruit workers from outside the EEA to fill a particular vacancy that cannot be filled by a British or EEA worker. Tier 2 (General) Migrant is known as a Points Based System application. Your employer will need to be licensed by the Home Office.

As with all Points Based System Applications, the applicants (those who apply) need to understand 5 key elements of their application: 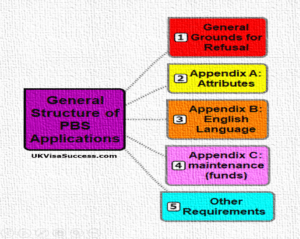 Let me explain this further.

To succeed in your Tier 2 (General) visa application, you’ll need to prove that you score 70 points. 50 points for attributes. 10 points for English language and 10 points for Appendix C (funds).

If someone makes an application from outside in the UK they need to always consider general grounds for refusal.

There are 11 mandatory and 14 discretionary grounds for refusal. If you are caught by any of these grounds for

refusal, the application is most likely to be refused. I’ve created a very detailed article and a video explaining General Grounds for Refusal. I showed you, guys, how to check if you meet these requirements. Please feel free to explore it further.

You’ll get 30 points if the job offer passed Resident Labour Market Test. There are exceptions to this rule. This is

when your job is on a shortage occupation list. Also, 30 points will be given automatically to someone is already in the UK and applied to extend their Tier 2 (General) visa.

The decision maker will give you further 20 points for proving that your salary is at the appropriate level. Generally, it must be at the level of at least £30,000. However, there are some exceptions to this rule. For example, if a form Tier 4 (General) student applies to remain as Tier 2 (General) Migrant. In this case, the appropriate salary will be £20,800.

Unless you are over the age of 65 or from a majority English speaking country, you need to show the English

language proficiently at the level of at least B1 of the Council of Europe’s Common European Framework for Language Learning.

You’ll need to hold at least £945 in your bank account for at least 90 days before you apply. You’ll also need to pay the healthcare surcharge.

You have to be over the age of 16. If you are under the age of 18, you’ll need a letter from your parents. In this letter, they need to confirm that they made all the necessary travel, reception and care arrangements. You cannot hold more than 10% of the shares in the company unless your salary is above £159,600 per year. You’ll need to wait for 12 months if you visit the UK as a Tier 2 (General) worker before. That is provided your previous visa was granted for more than 3 months. You do not need to wait for 12 months if your salary is above £159,600 per year. You’ll also need to provide a criminal record certificate when you apply.

I STRIVE FOR EXCELLENCE WHEN HELPING YOU. YOUR FEEDBACK IS MY FUEL. TELL WHAT YOU THINK ABOUT THE ARTICLE HERE.